My previous posts may be accessed here: http://wordydave.blogspot.com/

It's dark and cold. Frost bites the cul-de-sac as the car leaves the garage and heads north through deserted streets while most of Stockton sleeps. Lighted signs and streetlights color the way in the darkness. The birds are waiting, standing ankle deep in wintry water, waking to the blaring chorus of geese.

A few stars dance as dawn begins its daily ritual beyond the Sierra. Layers of fog embrace sleeping vineyards and kiwi trees along the way. Ranchers and farmers are breakfasting on eggs and toast. The cranes are thinking about preening and spreading their wings, but that would have to wait for more light.

I can barely see the pinkish vapor cloud above the Lodi wastewater treatment plant west of Thornton Road. One cloud blankets another. Flag City lights adorn the lines of sparkling big rigs as I drive through. Denny's is busy. The lube place is closed. It's six thirty five. I'll be turning onto Staten Island Road about six fifty.

I drive between the Interstate and vineyards. The smell of dairy mixes with the heater air. Dozens of calves stand beside their plastic igloos, waiting to eat. It's 31 degrees outside. I already ate my banana and tossed the peel in front of the passenger seat. It's 71 degrees inside. The birds are waking, waiting to pose for a few photographers.

The little town of Thornton greets me once again. Porch lights, street lights, bakery lights - all welcoming this Saturday morning traveler. The fire department had decorated its four doors with Christmas lights all around in double rows. Simple fare for a simple town. The Psychic Shop chose to remain in the dark. The sound of geese calling was getting louder as I would soon hear for myself.

Staten Island Road is a straight, dead-end stretch of road just to the east of the Sacramento River near Walnut Grove. A single line of utility poles march along the narrow, unlined and rutted asphalt. The wires sport hanging bird warning markers with round red targets in four inch triangular frames. This is a bird sanctuary in the middle of ag country. Cattle roam the narrow fields to the west. The land on the east side is farmed, then cut, then flooded for the thousands of birds that will winter here.

Fog shrouds the few birds I can barely see as the sun rises. They silhouette in a dreamy world that is starting to color with a pink/gold hue. My best pictures will be of the sun covered in rising geese, their blackened forms crisscrossing between my lens and that giant orb. Second best will be of the Sandhill cranes as they wingflap and banter before lift off. But I'm only guessing: I haven't even seen the finished photos yet!

Posted by wordydave's desktop at 10:30 AM No comments:

My monthly routine includes waking before dawn and driving north for 30 minutes to shoot sunrise pictures - sky - flora - fauna. It's my along time - life in the slow lane that balances a hectic week at work. I'm usually home by 9:30, in time for another special Barbara breakfast of toast and eggs, french toast or pancakes.

Asking God's blessing and protection, I never know what I'll see or experience, but trust His care and leading. The Preserve is an old friend after these few years, but there is always something new to see. Today proved that once again.

This week's rains really soaked the Valley. The Preserve was so wet, the trails were flooded and chained off. I had started my trek at the freeway off ramp at Twin Cities Road, where I toted my tripod to the fence line and started capturing sunrise cloud color reflected in the flooded fields to the east. From there I soloed down Bruceville Road, stopping to grab bird, sky and flora opportunities. A rainbow started coloring the sky to the west, as the sun was trying to rise above a low bank of clouds to the east. I waited . . . and waited . . . and finally there was enough light and color to take its portrait. That was a Preserve first - after thousands of photographs.

Another first greeted me as I drove to turn onto Desmond Road. A huge bald eagle perched on a power pole about 1/8 mile away. My camera was on the seat, but his majesty must have seen it and flew off to the south. The best I could do was stop and shoot through the windshield. Terrible quality - too far away - disappointing. BUT this was the first eagle I've seen here, and picture or no picture, just seeing it was worth much more.

Thank you, Lord, for letting me glimpse the majesty in your creation.

Link to Photo Series
Posted by wordydave's desktop at 7:17 PM No comments:

I haven't even thought about a title for the book - the book that has been rattling around in my head for a few years - the words that find their way to the scratchpad - the themes that drive the story - the imagined faces, voices, places - the length - I've thought about everything but the title.

And how important is it, really, at this point?
Posted by wordydave's desktop at 7:00 PM No comments:

Nothing like getting sick with a bad cold at the end of a great month. Humbling, draining and frustrating on my end of it. All part of the larger picture I can't see.


Too much to do. Too many projects. Falling behind in life isn't something I'd planned or prepared for. Need to pony up in middle age with all the work in progress and leave the easy lifting at the end.


I've been through this valley lots of times and found myself looking back and soon forgetting the pain and pressure.

It has been almost one year since my last post. Call it the Facebook Syndrome - that new disease with symptoms of writer's block and general distraction. Or is that just a convenient excuse for the fact that my mental prowess has been eroding dramatically these past few years? Or is it a fact that posting is an exercise in futility, since no one reads them?

We tend to love to communicate with those who will listen. There is an element of satisfaction, knowing someone might be edified, loved or challenged by our words.

I'm tired. It's 3:26 a.m. Couldn't sleep. Measurable pain in both knees from heavy lifting. Time to get up for work in a few hours. Another Thursday in the salt mine. 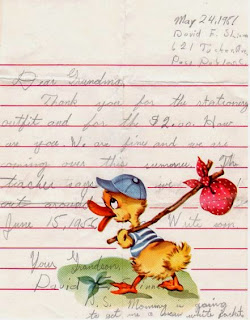 
Posted by wordydave's desktop at 3:38 AM No comments:

"No longer able to withstand the wrenching moans of the suffering wounded and dying Union soldiers, 19 year old Confederate Sergeant Richard Kirkland of the 2nd South Carolina approached Brigadier General Joseph Kershaw, CSA, seeking permission to go to their aid. Initially hesitant, the General acquiesced, refusing however to allow the white flag that would ensure his safety. Despite the danger, Kirkland sprang forward over the stone wall with canteens full and ventured out between the hostile lines. At first, Federals fired upon the young man but ceased as they soon discovered his merciful intent. Then cheers rang out from both sides as the man to become known as the 'Angel of Marye's Heights' offered water to one adversary after another. After helping those that he could, he crossed back to the safety of his lines, and resumed his duties as a Confederate soldier defending those lines." This photo is of the Confederate line on top of the hill, where Kirkland was stationed.
- from brotherswar.com 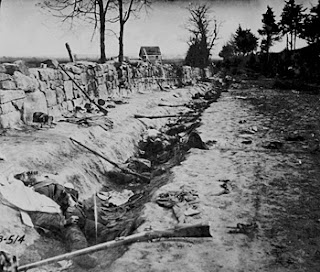 This was in December 1862 at the Battle of Fredericksburg, where my gr-great grandfather experienced his first sight of bloody war. I wonder if he participated in the cheering. A fellow-soldier, William McCarter who was wounded not 50 paces from the rock wall writes in his book, "A burning thirst was now coming fast upon me - that most terrible of all thirsts known to and experienced only by the wounded on a battlefield where water was not to be had. Oh, how I craved a cup of cold water. I would have given $1000 for it had I had it. I could not rise from the earth and dare not do so. Had I been able to duck the flying bullets and look for water, I knew not where to find any closer than the Rappahannock River . . . I called to them [a group of soldiers standing behind a small brick house for safety], 'For God's sake, throw me a canteen of water.' A brave, sympathetic fellow edged out from among the crowd with canteen in hand. He crawled on hands and knees, evidently intending to get near enough to throw the water to me. This soldier was struck by a bullet, causing him to beat a hasty retreat back to safer quarters, leaving me minus the relief he so nobly tried to render at the risk of his own life. Darkness was now coming on, yet the conflict raged. But before eleven p.m. that night, the Army of the Potomac was a defeated, dejected and demoralized mob."

"In September of 1863, Sergeant Kirkland would find himself fighting in the western theater as a detachment from Lieutenant General Longstreet's Corps moved west to support General Braxton Bragg's efforts to stop Union Major General William Starke Rosecrans and the Army of the Cumberland. They would do just that during the Battle of Chickamauga which would produce both a Southern victory and 34,600 casualties. Sadly, the valiant Sergeant ranked among those killed during this colossal battle. Mortally wounded in a failed charge, Kirkland exhorted his comrades to, 'Save yourselves,' adding 'Tell Pa, I died right.'" - from brotherswar.com

True acts of bravery are often motivated by an all-consuming love. No greater example and picture is seen than that of the Lord Jesus Christ suffering the weight of God's wrath for sins he did not commit. "My God, My God, why have You forsaken me?" Matthew 27:46. "Looking unto Jesus, the author and finisher of our faith, who for the joy that was set before Him endured the cross, despising the shame, and has sat down at the right hand of the throne of God." Hebrews 12:2

Posted by wordydave's desktop at 5:59 AM No comments:


I don't remember birthday #1 - My older siblings and parents may have, but my personal memories date from a much later year as trauma and fears started writing on my brain with their indelible pen. 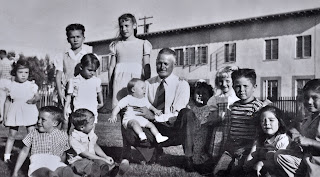 Oak Park memories include a few non-mentionable items, but mostly innocent fragments like getting chased by dad between the picket-fenced yards, seeing our dead fair-toss-game-won duck in the backyard, riding a bike off the corner cliff and crashing, kissing Lukey Stokke, and other assorted glimpses of growing up around zillions of neighbor kids.

I'm really thankful for the vintage photos that captured a childhood that my memory has forgotten. 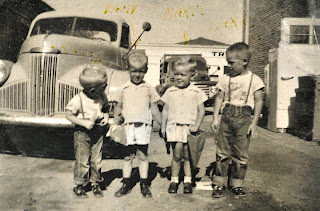 Posted by wordydave's desktop at 6:03 PM No comments: